Taylor Thimmesh is first Esports player to sign with R3V Sports and first athlete from JCC to sign NIL agreement. 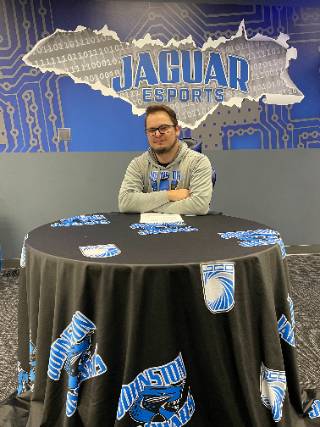 Smithfield, NC – (November 16, 2022) Taylor Thimmesh is proving that playing video games is not a waste of time. Thimmesh is the first Esports athlete ever to sign a NIL licensing agreement with R3Vel & Vick Entertainment, LLC (dba R3V Sports). He is also the first JCC athlete to be signed by an agency.

Thimmesh is ranked Grand Champion II in Rocket League. That is the third highest ranking available and attained by just .07 percent of ranked Rocket League players.

Thimmesh says he is most proud of what his accomplishments and the new NIL agreement because of what it opens up for other athletes in the National Junior College Athletic Association.

“Pioneering that for other NJCAA athletes, in basketball, football, or whatever sport is great,” Thimmesh says.

Thimmesh met the agents from R3V Sports at an Esports Tournament held on JCC’s campus back in October. That tournament was put on by Stay Plugged In. He adds, “This gives me validation that all those hours I spent improving were not wasted and that people who said video games would get you nowhere were not correct.”

Thimmesh is already committed to Concord University on a full Esports scholarship. He transfers there in the Fall Semester of 2023. He plans to major in Computer Science.

"This is a great day for JCC Athletics and all of our student-athletes current and future. Taylor having this opportunity and capitalizing on it now as a current NJCAA student-athlete embodies the essence and intent of the NIL,” says JCC Athletics Director Derrick Arnold.

“This gives students across all sports motivation and inspiration to continue working hard and striving for excellence not only in the classroom, but also in the competitive arena. Jaguar Nation is super excited about this opportunity and doors this opens for Taylor and his family. This is the first of many to come for Jaguar Athletics," Arnold adds.