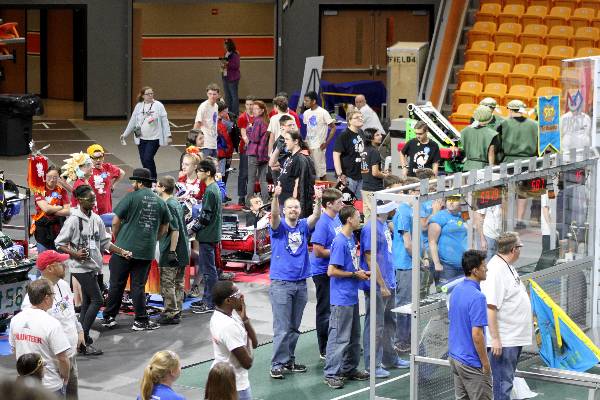 And while the end results weren't what the 29 high school students had hoped for, the team learned a lot, became better teammates, and had even more fun.

"I've had a lot of fun and I've learned a lot about robotics. It's really been the best experience I've ever had," said Jared Glover, a sophomore at Life Spring Academy. "I've learned that being part of a team doesn't mean that you are always the leader, but it all comes down to how well you worked with your team and cooperated with everyone else."

This year's competition, FIRST Stronghold, involved a medieval-themed castle defense game that challenged teams to build robots that could cross moats, scale castle walls, and launch boulders into their opponents' stronghold while defending its own.

Since January, the 29 students met four days a week after school and on Saturdays to design and build in six weeks their cool robot, CODI. Nine JCC faculty members, three parents, and two JCC students served as coaches and mentors for the team.

The students made executive, technical, financial, strategic, and operational decisions that mirror those of successful engineering companies, priming them for careers in science, technology, engineering, and mathematics. The project gave students real-life experience in handling too little time, not enough resources, and a tight timeline.

Brian Worley, director of advanced technology programs at JCC, was one faculty coach. Worley said he was impressed with the talent and teamwork of the students.

"What I found to be most impressive was they all came from different high schools and worked together as if they had known each other for years," Worley said. "There was a real since of pride from everyone involved knowing that we designed, built, programed and operated our robot competitively when only six weeks ago we had a box of parts. It was truly an amazing experience."

CODI experienced some mechanical problems early Saturday that proved too difficult for the team to overcome and qualify for finals on Sunday, but the challenges didn't extinguish their enthusiasm and team spirit.

"It definitely taught us that things aren't always going to go as planned, but we were able to work through the problems and come out in pretty decent fashion," said Luke Childers, a sophomore at North Johnston High.

Childers said the team is full of underclassmen like himself, and he's already excited about being a part of the JoCo RoBos next year. "We also got to see what other teams did to build their robot and why their robots performed better than ours," he said. "We can carry all of that knowledge back and use it for next year."

Parent Amy Plahuta said she was super proud of the time, effort, and energy the students poured into building the robot and showcased during the competitions. Her daughter, Natalie, helped design the team's logo and got a lot of experience with fundraising. In all, the team secured 10 sponsors that helped pay for extra costs and fees to get the team ready for competition.

"We're just so proud of these kids," she said. "They have really bonded and are so committed to each other. It's been a really good experience for them to stick with it for so long. It really says something about them as students and individuals."

Because the team won the Rookie All-Star Award at the South East Raleigh district competition in mid-March, they are eligible to attend the state competition in Charlotte April 9-10 to show off CODI to the judges. Three rookie teams are invited to attend with the opportunity of one winning a spot to go to the national FIRST championship in St. Louis, Mo. April 27-30.

Cut line: Student coach and JCC engineering student Adrian Wierzbinski gives a thumbs up that the drive team is ready to rock and roll at the district competition at Campbell University. Wierzbinski will graduate in May and has been accepted to the School of Engineering at N.C. State.