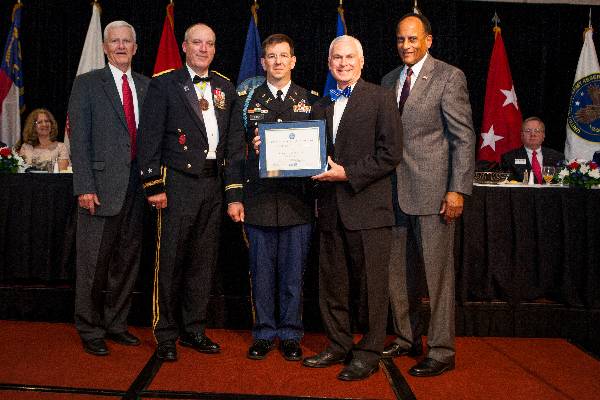 Johnston Community College has received the Above and Beyond Award from the North Carolina Employer Support of the Guard and Reserve.

The award is presented by ESGR State Committees to recognize employers at the local level who have gone above and beyond the legal requirements of the Uniformed Services Employment and Reemployment Rights Act (USERRA) by providing their Guard and Reserve employees additional, non-mandated benefits such as differential or full pay to offset lost wages, extended health benefits, and other similar benefits.

David Oliver, JCC networking instructor, and recently retired member of the U.S. Army Reserves, served in Iraq in 2006 and Afghanistan in 2012 while employed at JCC. A native of Erwin, Oliver served a total of 24 years in the U.S. Army Reserve. He has taught at JCC for 17 years.

“I was humbled to accept the Above and Beyond Award on behalf of JCC,” Johnson said. “I told the attendees, we often describe ourselves at JCC as a family. This award represents how we take care of our family. What an honor to accept an award of appreciation from those who take care of us so well.”