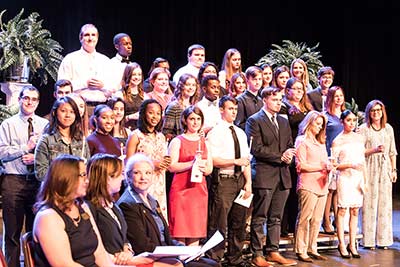 The international honor society recognizes the academic achievement of two-year college students and provides opportunities for individual growth and development through honors, leadership, and service programming. To be invited to be a member of Phi Theta Kappa, a student must have completed at least 12 hours of coursework toward an associate degree and must have obtained a 3.5 grade point average.

An induction ceremony was held May 1 in the Paul A. Johnston Auditorium on the JCC campus. JCC alum and former Beta Zeta Theta chapter officer of Phi Theta Kappa Shenan Higgins was the guest speaker. Higgins now serves as the communications officer for the Carolina’s Regional Alumni Chapter of Phi Theta Kappa, Alpha Omega.

The inductees then recited a pledge of allegiance to the society and to uphold the values of leadership, scholarship, fellowship, and service. As their names were called one by one, the inductees walked across the stage and signed the ceremonial guest book. The induction concluded with a ceremonial lighting of candles.