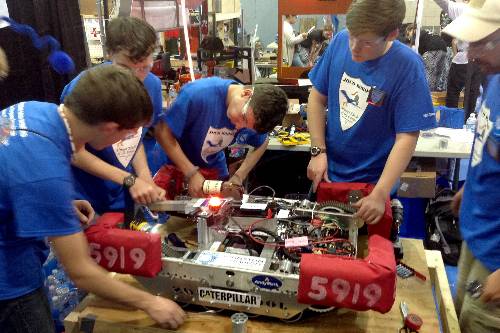 Johnston Community College's JoCo RoBos put robot CODI to his first test this past weekend and the results were outstanding.

"It was the perfect ending to their performance as we prepare for the Campbell University competition on April 2-3," said Lance Gooden, director of mathematics, engineering, and social sciences programs at JCC. "The students and the robot evolved and progressed tremendously after each match. We started as a rookie team at start of the event, but in our minds we ended the competition as an experienced team."

On March 12-13, the students competed against hundreds of other robotics students in their first district FIRST competition at Southeastern Raleigh Magnet School.

The team won the Rookie All-Star Award, which celebrates a rookie team exemplifying a young but strong partnership effort as well as implementing the mission of FIRST to inspire students to learn more about science and technology. They also received the Pit Safety Award and team member Jared Glover won the Safety Captain Star of the Day Award for his performance on Sunday. Only one is awarded each day to a safety captain.

The next competition, which carries the opportunity to qualify for the state championship, will be April 2-3 at the Gore Arena on the Campbell University campus. JCC is a title sponsor of this event with Campbell.

Twenty-nine high school students make up the JoCo RoBos, the county's inaugural NC FIRST Robotics Team. Since January, the students have met four days a week after school and on Saturdays to design and build their cool robot.

Being a part of the team requires long hours and hard work but the opportunity is well worth the commitment, said team member Troi Dixon.

"It was a lot of fun and exciting to see all the hard work pay off," Dixon said. "We actually beat the number one team in the first round, and our team was picked by another alliance to compete in the playoffs. As a rookie team, we weren't expecting to be picked by another team so that was a nice gesture that allowed us the opportunity to get playoff experience."

Gooden said he was proud of the student collaboration and their ability to adapt and make adjustments and improvement to the robot under extreme pressure and time constraints.

"This is like the March Madness of STEM, and you have to be there to see and understand how fun learning can be," Gooden said. "This is a fabulous opportunity for our students and our community and takes learning to a whole new level."

Cut line: JoCo RoBos team members make adjustments to CODI in the pit during the competition.