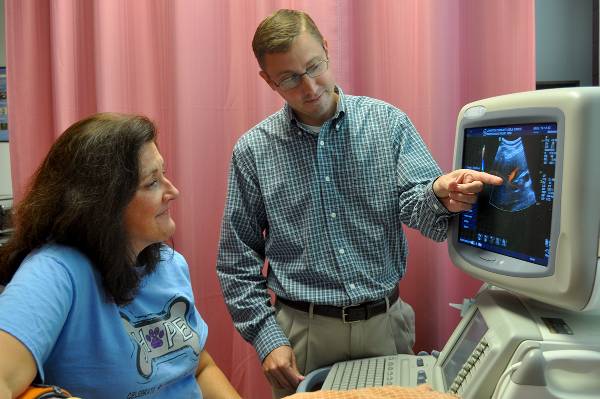 Ask Steven Penny what makes a good college instructor and his answer is simple.

"I try to be as dedicated to a student's success as they are," he said. "I really think my role is to promote student success in everything and every way that I can."

"I believe the more you learn the better teacher you are going to be," he says. "There's always something new to learn in ultrasound and that keeps me motivated."

Penny's passion for learning is one reason he's been named the recipient of the Earl C. and Doris F. Helms Excellence in Teaching Endowment at JCC. Selected by fellow instructors in the JCC Faculty Association, Penny received a $1,000 stipend in recognition for his excellence in the classroom.

Penny says writing textbooks helps keep him abreast of changes in the profession. But more importantly, it gives him an avenue to teach the profession from a sonographer's perspective.

"I know the informational needs of the student, and that's very important when deciding what to include in the textbook," he says.

Penny serves as a mentor for many of his students, and he tries to always lead by example.

"I try to use humor and keep things light-hearted," he says smiling. "I really do want all my students to succeed, because I know how hard it is to get into the program. It is also very important to be a good communicator with your students, and I make sure they are involved in their education."

Penny and his wife, Lisa, live in the Cleveland community. They have a son, Devin, 13, and a daughter, Reagan, 7.