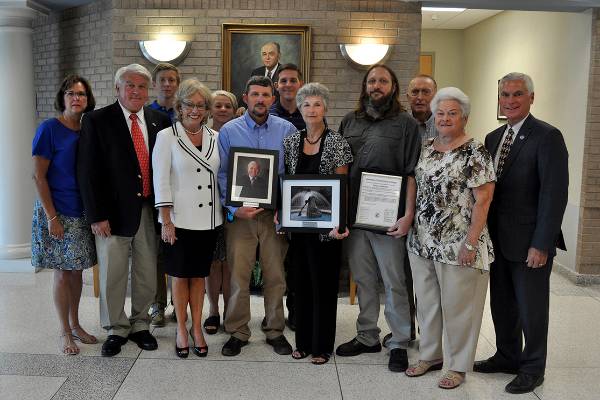 Woodall served as a JCC trustee for eight years.

The Johnston Community College Board of Trustees recently honored the late Durwood Woodall for his years of service to the college.

Woodall, 70, of Smithfield was a JCC trustee for eight years and was the vice chair of the board when he passed away in April.

A tool and die maker who was the co-founder of Tarheel Tooling, Woodall had a passion for people and for education. During his tenure as a trustee, he always had the best interest of students at heart. With his background in machining, Woodall had a special fondness for the advanced technology programs at the college and had supported the program, instructors, and students long before he became a trustee.

Lyn Austin, JCC trustee chair, said Woodall was a tremendous asset to JCC. When the Johnston County Board of Education appointed Durwood, Fred Bartholomew called and said "we are sending you as trustee the best man you will ever work with" and he was," Austin said of Woodall. "The best trustee and a man who was good through and through. He worked tirelessly for JCC and he will be missed."

Brian Worley, director of advanced technology programs at JCC, worked for Woodall at Tarheel Tooling. Worley went on to earn his bachelor's degree in industrial technology from East Carolina University. Worley said Woodall was a special mentor who put him on a path to success.

"He made an impact in my life from the day I met him," Worley said. "He's been making a difference in people's lives for a long, long time and I hope that I can keep it going and impact students's lives like he impacted me."

In honor of Woodall, the advanced technology programs at the college plan to dedicate their capstone project in his honor this upcoming spring.

Woodall's wife, Melba, thanked the college for honoring her husband and said he loved JCC. "He really enjoyed serving as a trustee," she said. "He looked forward to it, to all the challenges and there were many, but he thoroughly enjoyed being a part of this college."

In addition to his service at JCC, Woodall was also a 26-year member of the Princeton High School Advisory Council and a 15-year member of the Johnston County Industries and Capital Area Workforce Development boards. He also served 21 years with the Brogden Fire Department.

He was a lifelong member of Tee's Chapel Free Will Baptist Church, where he served as a Sunday School teacher, a deacon, and the church music and choir director for 40 years.