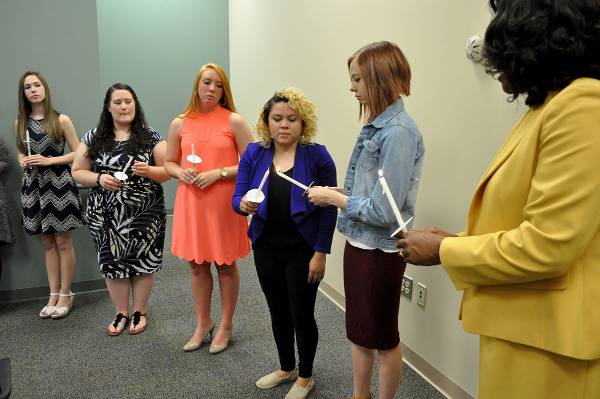 The international honor society recognizes the academic achievement of two-year college students and provides opportunities for individual growth and development through honors, leadership, and service programming. To be invited to be a member of Phi Theta Kappa, a student must have completed at least 12 hours of coursework toward an associate degree and must have obtained a 3.5 grade point average.

An induction ceremony was held April 15 in the Public Safety Services Building on the JCC campus. Stephanie Cassidy, a 2015 graduate of JCC and current student at the University of North Carolina at Chapel Hill was the guest speaker.

A PTK member last year, Cassidy shared with the inductees the hard work the club members put in to move the chapter from a level one status to a level four status. She congratulated the students and encouraged them to work hard and help grow the Beta Zeta Theta chapter of PTK at JCC.

"Some of you students might relate to this quote by C.S. Lewis. You are never too old to set a new goal or dream a new dream. I would like to encourage you to get involved," Cassidy said. "To the next generation, you have already taken the first step by participating tonight. My charge to you is to continue the work that has been started and help us achieve the goal of a level 5 star chapter at the 2017 spring convention."

The inductees then recited a pledge of allegiance to the society and to uphold the values of leadership, scholarship, fellowship, and service. As their names were called one by one, the inductees walked across the stage and signed the ceremonial guest book. The induction concluded with a ceremonial lighting of candles.

Cut line: Samantha Atkins of Smithfield, right, and Nicole Ayala of Raleigh light their candles during the PTK induction.