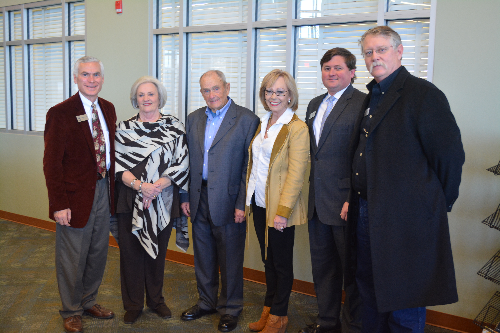 Johnston Community College Foundation hosted a reception in December recognizing Kenneth Talton of Selma who recently made a significant contribution to name the circulation desk in the College's library.

The purpose of the gift is to fund a portion of a major capital project. The circulation desk is now officially named the Kenneth A. and Daffie M. Talton Circulation Desk.

Twyla Wells, executive director of the JCC Foundation, thanked Talton for his generous support of the College. "We are so appreciative of Mr. Talton's support. The generosity of Mr. Talton and other individuals are allowing the College to pursue capital projects that will impact the campus and the community for a lifetime."

The 33,000-square foot, two story building is the College's first environmentally-constructed, or LEED-certified, building. The facility, which opened in fall 2011, meets the needs of the College's increasing student body and provides updated space for the library and distance education programs. In addition to housing a state-of-the-art distance education suite, the building also features themed rooms showcasing special library collections such as children's books, Johnston County and North Carolina historical materials, and music and media collections. There remain additional naming opportunities for the Learning Resource Center.

For more information about giving and naming opportunities at JCC, please contact Foundation staff at (919) 209-2222.