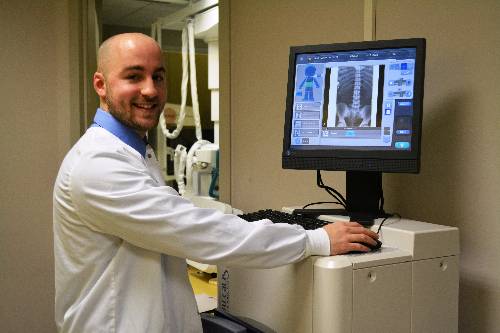 Five years ago, Matt Green earned an associate's degree in lasers and photonics and moved to Delaware to work for a company that made lasers and spectrometers.

After a few years, he realized his real passion was helping others.

In 2013, Green moved back to his native Dunn and enrolled at Johnston Community College. He took his prerequisites and soon got accepted into the radiography program, and he says it was the best decision of his life.

"School has always been a challenge for me due to a disorder I have called Tourette's syndrome," says Green, 27. "But the instructors at JCC have given much of their personal time and energy to help me and others succeed. They are here for anything you need at any time."

Green is JCC's 2015 recipient of the Academic Excellence Award. At JCC, academic excellence award recipients are nominated by faculty or staff and selected on the basis of selected academic criteria, which are consistent with Phi Theta Kappa Honor Society criteria. Fifty-eight students, one from each community college, received academic excellence awards. Green will receive a plaque and medallion at graduation for his accomplishment.

Phil Blackmon, Green's clinical radiography instructor, said Green is an exceptional student. He was one of 75 radiologic students from around the country chosen to participate in the American Society of Radiologic Technologists 2014 Student Leadership Development Program last spring.

"His professionalism, maturity, and clinical skills are second to none," Blackmon said. "Matt is respected by all students and technologists alike and has always displayed a high degree of integrity, responsibility, and ambition. He is definitely a leader rather than a follower."

A member of the Phi Theta Kappa Honor Society, Green will graduate next month with an associate in science degree. He hopes to study radiation therapy at a neighboring community college with the goal of one day helping cancer patients by working as a radiation therapist.

"I believe I have found my true calling in life, while also gaining the joyful opportunity of helping others."

Green is the son of June and Richard Green of Dunn.