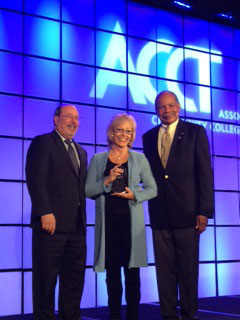 Lyn Austin is the recipient of the 2014 Southern Regional Trustee Leadership Award from the Association of Community Colleges.

A resident of Clayton, Austin has served as a member of the JCC Board of Trustees for 18 years. She currently serves as chair of the board, a position she has held for 14 years. Her service on the board began in 1996, and she has served tirelessly and faithfully since that time as an appointee by four different governors of the State of North Carolina.

Austin also serves on the Executive Board of the North Carolina Association of Community College Trustees (NCACCT) and is the chair of the association for 2014-15. She is also a liaison to the State Board of Community Colleges Policy Committee that makes recommendations to the full board regarding statewide policy issues that impact the colleges. She currently serves on the Community College Program Audit Study Committee of the North Carolina General Assembly, which is charged with determining how program audit procedures may be streamlined to minimize the burden on institutions being audited. Austin also serves every year on the committee that selects the NC community college president of the year and outstanding faculty member of the year.

In addition to her community college advocacy, Austin participates in a vast array of civic and volunteer activities. Some of the organizations on which she serves include the Clayton Cultural Arts Foundation, the North Carolina Board of Licensed Professional Counselors, the Women's Club of Clayton, and the Clayton Chamber of Commerce, which named her Citizen of the Year in 2002.

"Lyn has been a steadfast champion for JCC and community colleges across our nation for a long time," Johnson said. "We are so grateful for her passion and dedication to student success, and she is so deserving of this national honor. JCC is able to change lives every day because of Lyn's leadership and commitment to high quality, educational opportunities."

The ACCT Association Awards were announced during the ACCT Awards Gala on Friday, October 25, at the Hyatt Regency Chicago in Illinois.