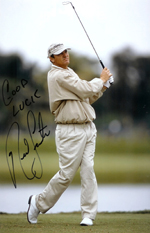 The Foundation hosts the annual Neal Lancaster - United Community Bank Charity Classic each October. A reception with reverse raffle and silent auction is held on Thursday evening before the golf outing providing an opportunity for guests to meet Neal Lancaster, other players, and enjoy a fun evening of food and fellowship.

The Charity Classic consists of a Super Ball format day of golf, with prizes awarded for the top teams in four flights for both morning and afternoon play. Several contests add to the fun of the tournament with prizes for both female and male players. All proceeds go to the College Foundation.

Neal Lancaster, a home-town success story, is a touring pro with a PGA title. He is making a difference in his own community by supporting educational opportunities for his fellow Johnstonians and hosting the golf outing. Neal's friend and golf pro, Clarence Rose, also stops by to join in on the fun!

United Community Bank, formerly Four Oaks Bank & Trust, is a major corporate sponsor of the Golf Classic, incorporated in 1912 in the Johnston County town of Four Oaks. The bank has several locations of operation in Johnston County.

Closest To the Pin